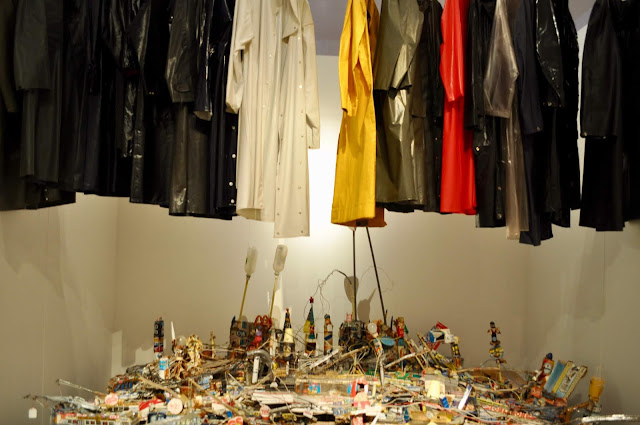 One of many unusual exhibits in the Museum Dr. Guislain in Gent is a clothes rail full of vinyl raincoats, mostly in black or brown with a few in yellow, red, green and white. Underneath is a display of random clutter that gradually becomes discernible as an unfinished project of vehicle models assembled from waste materials. The coats are part of a lifetime’s collection, assembled by Willem Van Genk (1927-2005), a curious and reclusive artist who lived and worked in a small apartment in Den Haag for over 30 years. A visit to the Museum Dr. Guislain was described in this 2012 blogpost. The story goes that when Willem was a schoolboy during the last war, the Gestapo forced their way into the family home in search of his father who was active in the Resistance movement. This experience during which the Gestapo conducted themselves with all the sensitivity for which they were famous would haunt him for the rest of his life. Totalitarianism would often break the surface in his work. His exceptional talent for drawing was recognised in his youth and as an adult he would obsessively pursue his passion for making incredibly complex drawings, paintings and installations whilst leading a solitary existence, avoiding human contact as far as possible. 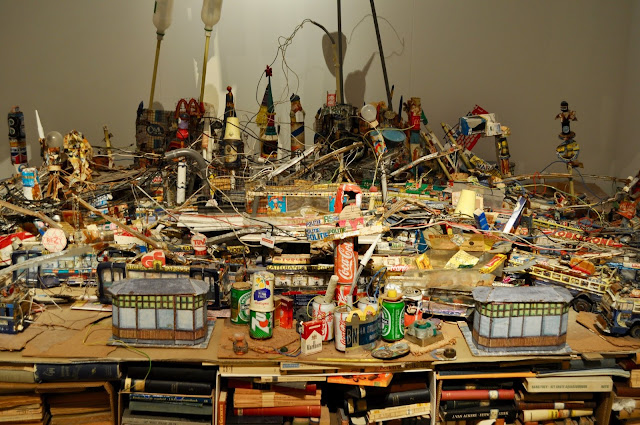 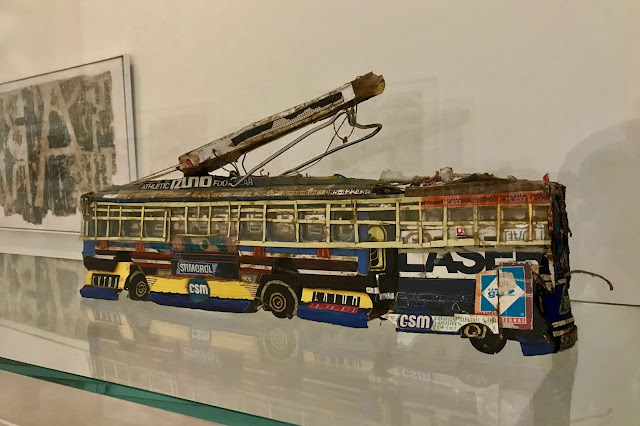 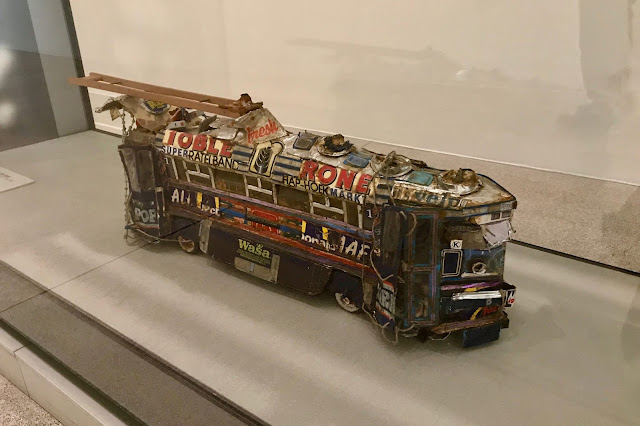 Many of Willem’s subjects were transport-themed cityscapes from across the globe. The travelling largely took place in his imagination assisted by a compendious library of reference books and magazines. He had a touching faith in the power of Soviet Communism to transform life for the better which explains why Eastern Bloc locations turn up so often in his work. A blizzard of ultra-fine, precisely drawn pen lines define his subjects, always alert to technical details, while plunging perspectives attract the eye. There’s a preference for expansive cityscapes observed from an elevated position. Architectural complexity, military parades, urban signage and popular culture all drew his attention. Many finished works are assemblages of smaller panels or vignettes, frequently cut and pasted from other projects – decorative borders enclose the panels, sometimes with medallion shapes inserted at points of intersection. Colour is usually applied in the form of washes and enhances the ominous atmosphere of impending doom. Somehow the darkest events of 20th. century Europe often filter their way into his paintings, intentionally or otherwise. 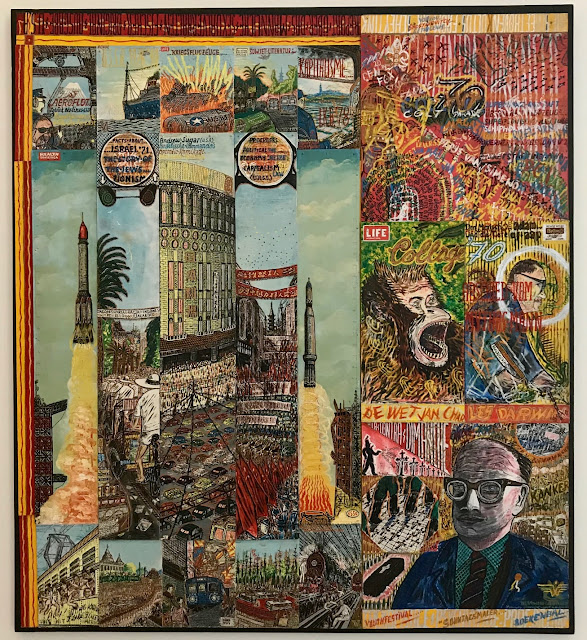 Willem’s passion for transport included airships and planes, trains above and below ground, military vehicles and traffic of all types but especially trams and trolleybuses. It was the tram and trolleybus that he chose to translate into three dimensions in the form of wondrous improvised models that resembled apocalypse survivors in their scorched and battered state. Bashed together from fragments of food and drink packaging, aerosols, bottles and cans, cartons and containers before being savagely beaten. There’s a repeated fascination with networks of rails, tracks and overhead power distribution that surge through his imagery, crackling with visual static. In a painting of Amsterdam Centraal station, trains seem to explode out of the station with such force that they threaten to achieve escape velocity. On city streets, trams and trolleybuses burst out of the picture plane, their forms distorted by electromotive force, with passengers in the grip of ecstatic frenzy. 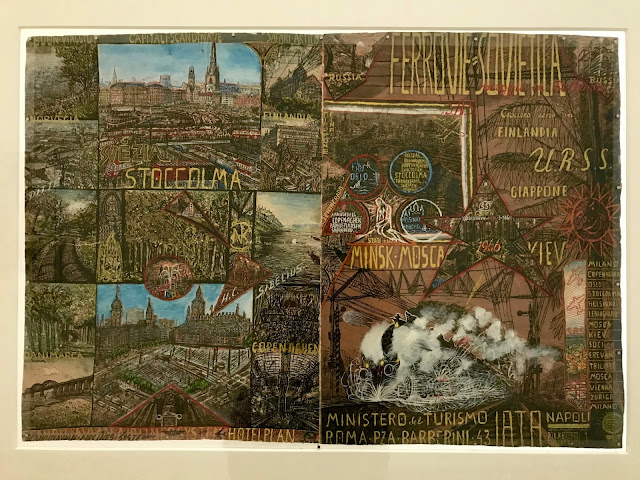 There’s an interesting debate around Van Genk’s status as an Outsider Artist. Some say that because he had a dealer for many years and regularly exhibited and sold his work that this description no longer applies. Willem would have agreed – in his own estimation he was an important artist. He compared himself with Rauschenberg and complained about the relatively modest sums that his work commanded. To me, the more important question may be whether Roger Cardinal’s term has outlived its usefulness if it needs to be so narrowly circumscribed. The comparison with Rauschenberg is not without merit – they certainly shared a fascination with conveying the pace and exhilaration of modern life via multiple imagery. 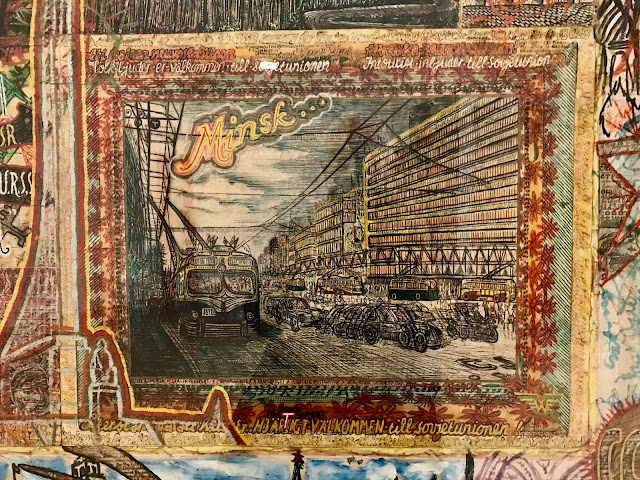 To return to the collection of coats, Van Genk claimed that the act of wearing them in public gave him protection against the hostile forces he perceived around him and perhaps, in a similar way, his artworks were part of a defensive strategy to cope with the the mass of visual information that threatened to overwhelm him. It’s easy to imagine him, wearing a sinister vinyl coat, staring at an array of flickering monitors displaying montages of live-streaming from the world’s major cities, from Arnhem to Zagreb, from Wuppertal to Minsk and from Moscow to Madrid. With a flick of a switch, as one is deleted another is imported and a new mosaic of urban imagery is formed. In his mind’s eye, he sees circuit diagrams, metro maps and signalling diagrams as he inches forward to a place of total control. These photographs of his work were taken in Gent (Museum Dr. Guislain) and in Lille (Lille Métropole Musée d’Art Moderne). 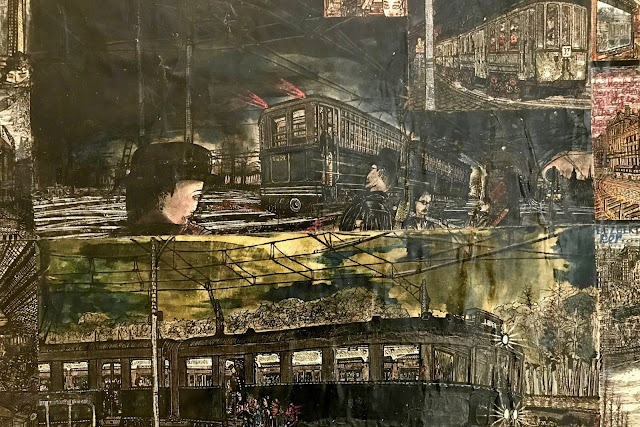